Should I Repair or Replace My Commercial Roof? 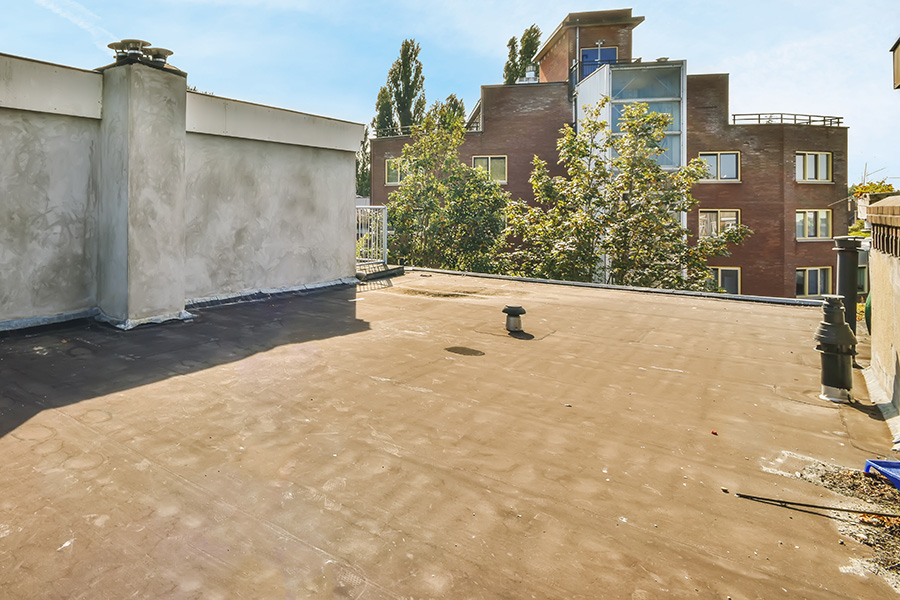 Owning or managing a commercial building, you have a lot of responsibility and items to manage. Building maintenance and upkeep is likely included within your tasks, which should include the roof. While you might hope the roof will last forever, damage can happen that will require your attention. It is also recommended that routine maintenance be performed to keep the roof in working order.

When your roof suffers damage, you may question whether repair will suffice or if a complete re-roof is needed.

Understanding and knowing the signs of each will help you make that decision. Once you decide what is best for your business or building, you can plan, budget, and schedule the job to be done. We’re going to discuss the signs of damage, when repair is necessary, and when it is time to have a complete re-roof  your commercial building.

When your commercial roof is damaged, it will show you. Below are signs that your roof has suffered damage and needs to be assessed.

This is not an all inclusive list of signs that your roof has been damaged, but these are very common signs you should look for. If you notice any of these signs, you will want to contact a professional roofing contractor to discuss your options.

When to Repair Your Commercial Roof

Leaving a damaged roof un-repaired will only make the issue worse. As soon as you discover the damage, you will want to call your trusted local roofing company. They will be able to assess the extent of the damage and offer you their best recommendation.

Most of the time, a commercial roof can be repaired. It is important to find the best available roofer to do so to ensure it is done properly and you are not just wasting your money. If your roof can be repaired, that is definitely the route to go. However, if your roofer recommends replacing the entire roof, it is best to go that route. While a repair might cost less now, if you put off the re-roof, it could end up costing you a lot more in the end. Weighing your options should give you the best choice for you and your business.

After your local roofer assesses the damage to your commercial roof, you will know the extent of the damage. While each roof should be handled individually, there is a general rule of thumb that if more than 25% of the roof is damaged, it should be replaced. If your roof has a small area that is damaged, repair is the way to go. Again, discussing the damaged area with your local roofer is always recommended to determine what is best for your roof.

When to Replace Your Commercial Roof

Sometimes when a commercial roof is damaged, it is recommended that it be completely replaced over repairing it. Yes, it will cost more upfront, however, in the long run, it is worth it. If your local roofer recommends replacing your roof over repairing it, it must have sustained extensive damage. Choosing to not replace it, and just repair it, could cost more when it suffers the same damage in the near future.

Similarly, if your roof has been damaged in the past and you repaired it, now it has been damaged again. Now might be the time to completely replace it. Continuously repairing a roof not only will cost you more in the end, it also shows there could be an underlying issue with the roof.

Lastly, if your commercial roof has suffered extensive damage and it is considered old for the type of material it is, you might consider completely replacing it over repair. For example, a foam roof has a standard life expectancy of 15-25 years. If the roof is 17 years old and has been heavily damaged, it might be best to replace it.

Every commercial roof is different.

Craven Construction is your East Valley commercial roofing professional. Our team is highly experienced with roofs of every size and type. If you are in need of a new roof, repair, or maintenance, contact our office today. We are available to assess the damage to your roof and provide you with a FREE estimate.

Has  your commercial roof suffered damage?

Craven Construction is dedicated to providing our customers with honest and reliable roofing services. With over 19 years of residential and commercial experience, we are here to serve you and all of your roofing needs.

Our team of experienced roofers is licensed and knowledgeable in working with all types of roofing. We offer high quality roofing services and are capable of getting your project completed in a timely, efficient manner.